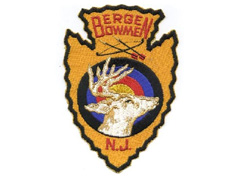 A scattered group of archery enthusiasts got
together on a cold day in February 1953 to
talk about organizing an archery club.

The meeting was held in the old library
building at Maywood and Passaic Street in
Maywood. The building has since been torn
down and a small park is in it’s place.

No one knew the direction the Club would
take on that day. All those who attended
knew that there was a need to share their
fledgling sport of archery with others.
There were not only bow hunters, but there
was interest from target shooters as well.

It may be interesting to note that licensing for
bow hunters had begun only five years prior
in 1948.

And so the BERGEN BOWMEN Archery Club
was formed…